A half-Maori protagonist was enough to get me interested in Song of the Spirits by Sarah Lark.  This is the second novel in a historical trilogy about a family composed of English descended colonists and Maori who inter-married during the 19th century.  The novel was originally written in German and translated to English by  D. W. Lovett.  I won the book last year from the Goodreads Giveaway.  The main reason why it has taken me so long to read and review this book is its length.  I didn't have any way to fit it in my schedule while I was in library school.  Since I need to take time off from library school, long sagas aren't so much of a problem for me. 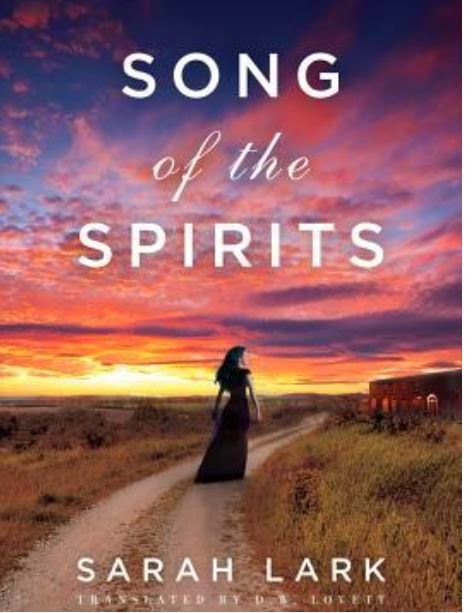 The half-Maori protagonist was certainly interesting, though I didn't think she matured as much as her cousin Elaine O'Keefe over the course of the narrative.  Kura always knew what she needed from life and was very goal-focused.  Sadly, other people only mattered if they were helping her to accomplish her goals and that never changed.  Yet she was a highly gifted singer and musician who could summon Maori spirits with her flute and mesmerize audiences. Although Kura's main goal was an opera career, we learn something of Maori music in the process of following her adventures.  There's a Maori Music You Tube that will give you the flavor of  the type of music that Kura was trained in by her Maori mother.  She was also trained in Western classical music and singing by an English governess.  I was impressed by Kura's fortitude and belief in herself, but she could be quite ruthless toward anyone who stood in her way.

At the outset of this novel, Elaine O'Keefe  didn't really know what she wanted.  She went through a process of  trial by ordeal that taught her what her true priorities were.  Since Elaine was capable of caring very much about the people in her life, she is a more sympathetic character than Kura who easily discarded people without looking back.

I saw a review on Goodreads that accuses this author of creating male characters who were either misogynistic or weak.  I think that William Martin, an Irish immigrant to New Zealand, is definitely an exception to this pattern.  He grows during the course of the novel into a resourceful and heroic character that I very much respected.  I also respected Timothy Lambert.  He was thought to be weak by the people who surrounded him, but he managed to overcome the prejudices of his family.  Yes, he needed help to do this, but it was actually his own knowledge and abilities that allowed him to finally achieve his ambitions.  He just needed other people who were willing to give him a chance.   Finally, Caleb Biller was a gay man who didn't want what society insisted that he should want.  Yes, there were gay men who did turn their backs on social expectations during this period, but I don't think that readers who haven't been in Caleb's shoes have the right to disparage him as weak.  He did manage to obtain some semblance of a life for himself within the limitations of the Victorian mindset.

So everyone who isn't a villain gets a chance to be happy.  HEA is the name of that particular game, and I don't necessarily look down on HEA as some readers do.  I think that it's a fine thing to imagine that justice triumphs and people get what they deserve.  That's one of the reasons why I enjoy mysteries.   Yet not all stories that end with HEA are equally satisfying.  Sometimes the author has failed to convince me that the resolution would truly result in HEA for all concerned.  That is the case with Song of the Spirits.  I'm not actually convinced that Caleb will end up being truly happy with his situation, but I could be wrong.  Yet he does seem to have more of a chance at happiness than he might have gotten otherwise.