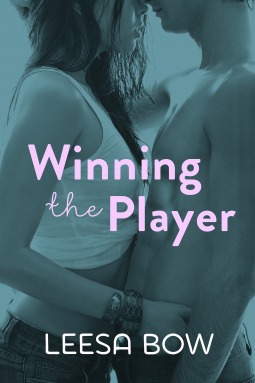 Tara: Welcome. You’re here to promote Winning the Player, a New Adult book. Tell me, please, what was the inspiration behind this story? How did it come to you?

When injury destroyed her dream of playing college basketball, Aubree Taylor fled overseas. Now she's finally home again and ready to move on with her life. Until she runs into Hunter Stone on her first night out, the only guy who's ever meant anything to her – and the last person she wants to see.

Since she ran out on him two years ago, Hunter hasn't been able to get Aubree off his mind. The sexy football star has had girls all over him for years, but Aubree is the only one to have ever seen behind the cocky persona he puts on for the crowd.

Despite her attempts to keep her distance, Aubree is unable to resist the strong attraction between them and it isn't long before they fall into a passionate relationship. She has never been afraid of a challenge, but Hunter's arrogance and inablity to trust are testing her to her limits. Aubree must decide whether to follow her heart and lower her guard…or risk losing the best thing that's ever happened to her.


Leesa: My husband played Aussie Rules football and my four daughters all played basketball. One of my daughters played College basketball in the USA while my second daughter was diagnosed with bone cancer and had all her basketball dreams ripped away. She is well now and in remission but much of my inspiration came from family.

Tara: We focus a lot on heroines here on Book Babe. Tell me what makes your heroine(s) strong.

Leesa: My heroine, Aubree lost her father at a young age. She found strength in basketball and she soon became an elite athlete. In her last year at school a devastating knee injury severed her dream of playing basketball for Australia. After years of focusing on playing college basketball in America she now faces an uncertain future. Her ability to cope and push on, and find another passion in life, shows her real strength.

Leesa: Sometimes, and sometimes I see my daughters. Overall she is an individual.

Leesa: Aubree doesn’t wear a lot of makeup and likes to dress in jeans or old track pants. She has natural beauty. She is thoughtful and considerate, never wanting to hurt people intentionally. I like how she works in a nursing home and takes up a friendship with one of the elderly residents.

Tara: Where do you see your heroine ten years from now? What will she be? What do you predict she’ll accomplish?

Leesa: I see Aubree married to Hunter with a couple of children. She would have graduated from university as a teacher and continued to coach junior basketball.

Tara: What would you like readers to gain from reading your book? Is there a strong moral? Do you hope they will laugh, learn something, ponder a point?

Leesa: Yes I think readers will laugh and cry in ‘Winning the Player’. It is a fun read about second chances, and never giving up. Aubree’s grandmother offers plenty of advice we could all learn from.

Tara: Now let’s talk about your hero. What draws the heroine to him? Is he based on a real man in your life by any chance?

Leesa: Football is Australia’s favourite game and football players have a strong following, like rock stars, with girls. For an ordinary girl to win the heart of a star football player is inspiring. Hunter has an air of arrogance about him stemming from his stardom, however he softens around Aubree, and sees the person she is on the inside. I like that he is attracted to her as a person, not just for her looks, and that makes him more appealing as a hero.

Tara: Your book takes place in Adelaide, South Australia. If I were a tourist, what would you recommend I see in this town/country?

Leesa: Adelaide is a scenic city with iconic beaches, fine restaurants and a lover of sport, especially Australian Rules football. It is like a giant playground for water sports, bordered by world class vineyards and rivers where many people have built holiday homes at only an hours drive from the heart of the city. I make mention of Glenelg, and Victor Harbor, two popular beach destinations with tourists. Our beaches are known for the white soft sand, and spectacular sunsets. I also talk about Popeye, a boat that offers rides along the River Torrens in the city. Adelaide is also known as the city of churches.


Tara: A more personal question. What’s the one thing you hope to accomplish before you die? Your main goal?

Leesa: I have a bucket list of places to see in the world. Apart from being a good mother and wife, I hope to someday hit USA’s best seller’s list.

Leesa: I once had chickens, canaries, dogs, fish, and rabbits for my children. Slowly the animals dwindled, and then my eldest daughter left home and took the dogs with her, A white German shepherd, a Border Collie, and a Samoyed cross Golden Retriever.


A few weeks ago the Border Collie died, age 13 years, and it was a traumatic experience as my daughter was on her honeymoon.

Thank you for joining us today and good luck with your release! Readers, buy link is below!

Leesa Bow grew up in Broken Hill and moved to Adelaide, South Australia with her husband.

In her spare time, Leesa enjoys watching basketball and football, having beach days with the family, catching up for coffee with girlfriends, and taking long walks along the beach.

Leesa only began writing when her second daughter became sick with cancer. Initially writing was therapeutic, but when her daughter got the all clear, she decided to continue writing seriously.