Romancing the Rumrunner by Michelle McLean 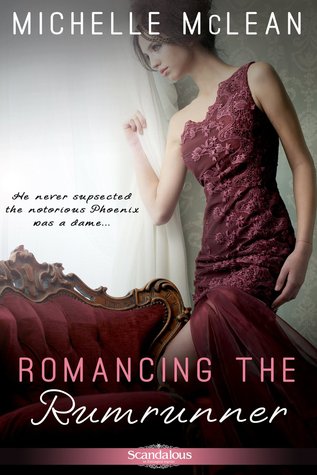 "If God had meant for us to go barreling toward each other at forty miles per hour we'd have been born with wheels on our feet."


It's a lady running a speakeasy and a P.I. determined to haul her in...thinking that she's really a he named The Red Phoenix.

She needs to keep her show running in order to pay off her dead father's debts, and he needs to bring her down to get in the Police Force's good graces again. What a conundrum!
Is there really any way for either one to come out on top?

I liked this story. It was an easy, uncomplicated read. I think there could have been more meat to it though. And I did expect a lady rumrunner to be a bit tougher.

What I liked was how the heroine realized being sexy/sensual is okay. She becomes aware of her own power.

"There was something incredibly empowering about striking a man dumb."

She grows in confidence too, thanks to singing onstage. I'm not sure if this was intended to be a big deal, but for some reason this really came off the page for me.

As the story continued though, some things began to irritate me or not sit well with me. Some of the things she does are just not explained, make no sense. Letting Tony into her booze room. How incredibly stupid. Her continuing to sing at his club when it becomes obvious she's not going to get anything out of it as far as "scoping the competition".  On the contrary, she's hurting her own business. Her apparent unconcern with money one moment, then slumping with exhaustion the next because she's doing too much in order to pay back a mobster.

But what I really hated above all is how Tony got on her case for singing too sexy. To me, he implied that because of her sexy, sultry singing--which he'd warned her not to do--is the reason a man nearly attacks her. Like she's asking for it. He even warns her not to sing that way anymore, or he'll react.

Until that point, I actually liked Tony. This was a hero-killer for me.

Also disappointing to me is...well, she's a singer and she's up there singing sultry tunes... WHAT is she singing? I personally love the music and lyrics from the twenties and would have loved to have known what she was singing. Lyrics from those days, they are public domain, so share them with us! If you can't for some reason, make some up!

It also didn't have a strong twenties feel to it. Yea, they wear dresses with fringe, headbands, and sing in speakeasies, but beyond that...