Daughter of the Gods: A Novel of Ancient Egypt by Stephanie Thornton 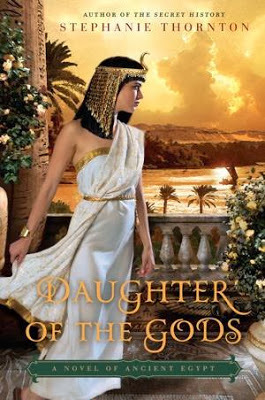 Too often, historical fiction novels about women who held a position of power focus on not what they did or accomplished for their kingdom/country, but who they slept with or how many lovers they had.

That's why I was pleasantly surprised by this book. Oh--Hatshepsut has a lover, of course, but while the romance is ongoing throughout the novel, the story also tells us about the things Hatshepsut did--went into battle against the Nubians, ordered executions, heard peasants' complaints, funded a three-year expedition to bring Egypt new wealth and broker more trade.

And all the while, her throne is threatened from here and there, and she must sacrifice much to ensure her country does not see civil war.

And she builds tombs and obelisks. Lots of them. To be frank, this was the only downside to the story for me--all the details about tombs and stuff. I'm afraid I don't have a strong interest in pyramids or architecture. That's just a personal thing. Frankly, if I were in her position, I'd be doing more for the people and less worried about putting a ton of wealth into a pyramid, but this was a very different culture and a very superstitious one. The superstitions were interesting to me--how she wrapped a heart to ensure someone went to the "Field of Reeds" and all the bits about gods and goddesses were intriguing, especially when Hatshepsut has a little "incident" with what could be construed as an angry god.

I enjoyed this story though. We have a very strong woman here, and the novel is a great tribute to her. The romance didn't overpower the history or the details of her reign. Stephanie Thornton is def an author I will be watching for more from. I'd also like to add that I've attempted quite a few novels about this female pharaoh and this is the first one I've read in its entirity. I did not enjoy the others for whatever reasons, mostly due to boredom or writing style, so I really feel a good job was done here. People who have never read or heard of Hatshepsut will learn a lot from this.

I won this book on Historical Fiction Virtual Book Tours.