If you look at the summary for Frog Music by Emma Donoghue, you might think that this is a murder mystery investigated by a burlesque dancer in 1876 San Francisco.  While it does contain elements of a murder mystery,  investigation isn't the focus of the plot or the central character.   I had never previously read Donoghue, but I'm aware that she doesn't write genre fiction.  So I didn't really expect a mystery along genre lines from her.  In fact, I wasn't sure what to expect. 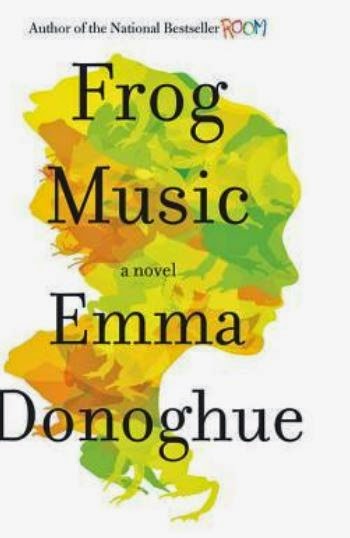 The murder victim, Jenny Bonnet, was a real person as Donoghue reveals in her Afterword. If you would like to read an obituary published soon after her death, see Jenny Bonnet Obituary.  Scroll down to the second item on the page.  Jenny was an unusual person in the context of 19th century San Francisco.  She dressed as a man and hunted frogs for her living.  Donoghue portrays her as independent and very outspoken.  In the novel, she often got into fights because she always said exactly what she thought regardless of circumstances, and refused to kowtow to anyone.  In real life, Jenny's murder is still an unsolved case.  Emma Donoghue's  ideas about who murdered Jenny are based on her theories about her.   There have been some very interesting stories told about Jenny Bonnet that Donoghue includes in her Afterword. I agree with Donoghue that her version of Jenny Bonnet is as likely to be true as any other.

Burlesque dancer Blanche Beunon, the main protagonist, also actually existed.  I have to say that I loved the way she was portrayed in this book initially.  She was so comfortable with her sexuality, and I got a real kick out of one song that she used in her act . I was also interested in her circus background.  Blanche knew Jules Leotard, who invented the flying trapeze.  "The Man on the Flying Trapeze", which was inspired by Jules Leotard's popularity as a performer, is another song that appears in Frog Music.  Donoghue appended notes about the songs in the back of the book, and I was amazed by what she had to say about this famous trapeze song.  I realized that I'd never heard the entire song.You can find the 19th century lyrics here.  You can also find a playlist where you can listen to all the songs from Frog Music at  8 Track Radio.

Blanche's life changed completely in the course of the novel and she becomes a very different woman.  She had never thought of herself as being exploited by men or the sex industry, but her eyes are opened by events.  I am sex positive, and don't personally believe that the sex industry is inherently abusive. Unfortunately, as in many industries, most such businesses are structured to benefit management a great deal more than the employees.  Then there's the problem of sex workers with children.  In the period that the novel deals with,  management was often very unsupportive to sex workers raising their children as Blanche found,and the fate of such children could be quite horrific.  Donoghue shows us the extreme indifference and brutality to which children were routinely subjected in the 19th century.  She shines a light into some very dark corners.

San Francisco has always been known as a refuge for the unconventional like Jenny Bonnet and Blanche Beunon.  Yet being notorious for non-conformity can be as dangerous in San Francisco as it is in other places.  The murder of Jenny Bonnet and the murder of Harvey Milk were separated by a century. Hate crimes like these can happen anywhere, so long as intolerance continues to be taught. We need books like Frog Music to remind us of this fact.