I confess that I have never read George Sand's work and couldn't name a single book by her until very recently.   I only knew about the prominent men in her life.  Perhaps this is why Anna Faktorovich decided to call her novelized version of the life of this author The Romances of George Sand.  Yet it's really sad when what we most remember about a feminist writer is her romantic entanglements with men. Now that I've read Faktorovich's book, I am here to tell you that the romances were the least interesting aspect of George Sand's life. 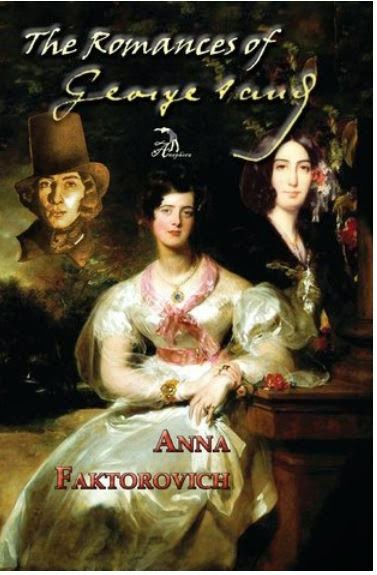 One personal fact that I had previously known about George Sand was that she had cross-dressed.  The image on the upper left of the cover depicts George Sand cross-dressed as a man.  The reason why women who cross-dressed interest me is because historically women engaged in this practice because they wanted to involve themselves in activities that weren't considered acceptable for women.  According to Faktorovich, George Sand's mother first dressed her as a boy  because  she wanted her four year old daughter to accompany her father, an officer in Napoleon's army, when he met with important people.  It apparently was considered appropriate for a four year old son to see what his father did, but not his daughter.    Faktorovich also tells us that the French fairy tale "Belle-Belle ou Le Chevalier Fortune" influenced George Sand a great deal when she was a child.   It was about a girl who dressed as a man in order to become a soldier in the King's army.  Here is an English translation of this fairy tale that is ascribed to Madame D'Aulnoy (1650-1705).

George Sand came from a privileged background.  She was the heir to her grandmother's estate, Nohan. I was amazed to learn that George Sand's tutor, Deschartres, who was a physician, taught her about medicine and other sciences.  He also utilized her as an assistant for amputations and other types of surgeries.  After Deschartres  death, she stepped into his duties as a physician to the local peasants providing free medical care to them.  Because she wanted to find a source of independent income, she wondered if wealthier patients would pay her.  When she broached the concept to wealthy individuals of her acquaintance, they laughed at the  idea of a woman physician.  If she had been born somewhat later, a medical career could have been a real possibility for her.  In 1875, the year before George Sand died, Madeleine Brès became the first female physician in France.  See Doctors' Wives and Women Doctors: Imagining Medical-Scientific Women in Early Twentieth Century France by  Martha L. Hildreth which deals with the struggle of Frenchwomen for recognition in scientific fields such as medicine.

Sand was also a political activist.  She wrote political articles for left wing newspapers such as Le Figaro which was named after the revolutionary Barber of Seville created by the radical 18th century French playwright Pierre-Augustin Caron de Beaumarchais.  Sand's novel Engelhard dealing with a man who wanted to kill Napoleon caused her to be placed under police surveillance.   Horace, another of her novels, was rejected by her publisher for being too radical.  So she went indie.  She and two other radical authors started publishing a journal called The Independent Review where she serialized both Horace and a later novel of hers called Consuelo.  Now I'd definitely like to know what it was about Horace that was considered too radical for publication.  It's too bad that Faktorovich  doesn't tell us.

Faktorovich also doesn't give us an author's note distinguishing between fact and fiction in her novel.  She tells us what her sources were, but she doesn't make clear to her readers exactly why she chose to publish this as a novel. The book is written almost entirely in third person narrative like a biography.  It also contains digressions by the author in which she gives her opinions on various matters which would be more appropriate in a work of scholarship than in a work of fiction.

In conclusion, I actually would have liked The Romances of George Sand better if Faktorovich had called this book a biography of George Sand.  I was very interested in a large portion of the content, but I don't think much of it as a novel.  One of the reasons why the romance aspect didn't work so well for me was because I didn't think that Faktorovich wrote especially good sex scenes.  They felt inauthentic and sometimes poorly motivated from a character perspective.   I didn't always understand why George Sand was reacting the way she did.  I like to see characterization that is more solid in fiction.